Of Staff Rides and the Immaculate Conceptual

The Costs of Losing Crebilly

Mr. Thompson began by addressing Toll’s argument that we should not be allowed to argue points even if they were part of the conditional use record because the township didn’t rely on them in their decision. Neighbors for Crebilly, Toll’s lawyer claimed, should take the case as we find it. Mr. Thompson responded that Neighbors for Crebilly was granted party status. We presented the testimony of two experts in their fields. One expert, Michelle Adams testified to the inevitable environmental degradation of Crebilly Farm and downstream waters and properties that would result from the inadequacies of Toll’s stormwater management plan and specifically the lack of protection it would offer Radley Run and the Brandywine Creek. Our other expert, former chief archivist for the Marine Corps, Joseph Miller, testified to the likelihood of troop movements across Crebilly to flank General Stephen as well as the artillery fire likely taken by Hessians. “So this is how we find the litigation,” Mr. Thompson said. In short, the evidence presented by Neighbors for Crebilly over the past year was part of the record and will be part of the record going forward.
​ 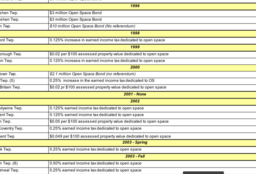 The round of applause heard 'round the county 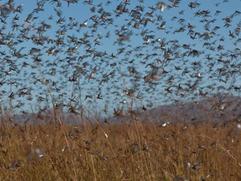 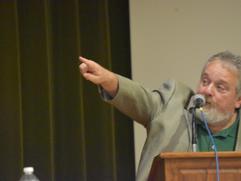 Open Space efforts in nearby townships

Patrick McKenna, the township’s solicitor, went next. In his 20 minute presentation, Mr. McKenna deconstructed Toll’s argument point by point, showing that Toll had not met their burden under the conditional use process. He focused his comments on intersection improvements and the construction of a connector road between West Pleasant Grove Road and 926, but unfortunately, he did not mention any of the significant evidence presented by Neighbors for Crebilly in two separate meetings and in cross examinations last year. It was left to our attorney, Mark Thompson, to refocus the court’s attention on this important evidence of the historical and environmental degradation that would result from Toll’s Colony.
​

Mark Thompson, arguing for Neighbors for Crebilly, noted our support for the township's reasons of their denial of Toll's application. Mr. Thompson also invoked other evidence that NFC presented during the year long conditional use hearings, in particular environmental and historical concerns and how they relate to the Environmental Rights Amendment. 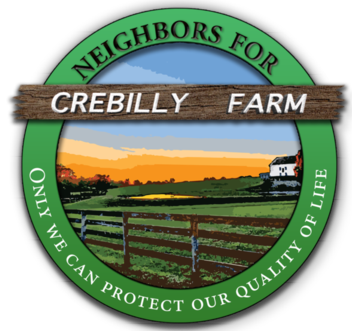 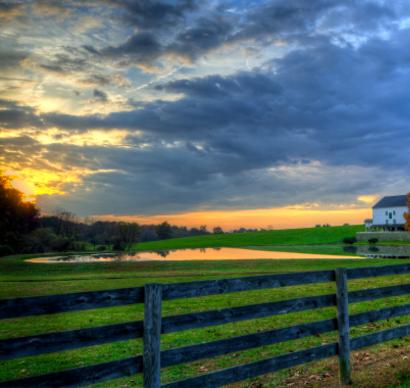 Given this support from taxpayers, the Robinsons had a moral obligation to consider the public when disposing of this historic farm. Where was their sense of gratitude to taxpayers? Where was their concern for history, the environment, and the community? Why they didn’t try to sell their land to a consortium led by Chester County and a conservancy for a little less than what Toll would pay? Keep in mind that we’ve never argued that the Robinsons should give the land away, even if that’s not what the heirs to other fortunes in Chester County have done. They should get paid, but the price should reflect the millions of dollars in tax abatements they received. The Robinson’s seemed to understand this which explains why their attorney characterized a previous sale by the Robinsons of 200 acres to a developer who built Brandywine at Thornbury across the street as “transferring 200 acres to an award-winning developer (sic).” He made it seem like they were performing a public service by selling off taxpayer subsidized land for profit.


The decision now rests with Judge Tunnell who will likely render a decision by the end of the year. This is just the beginning, though, of a long process.
​​ 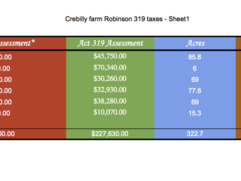 Neighbors for Crebilly expert witness J. Michael Miller noted during one of the conditional use hearings the unique topography of Crebilly which would have offered "defilade" to advancing Hessians troops.

Even though Crebilly is not located within the Battle of the Brandywine National Historical Landmark, the township concluded from its own Revolutionary War expert that action associated with the battle took place on Crebilly Farm, a fact that was not taken into account in the township’s written decision denying Toll’s application. Mr. Thompson said that “we believe a more expansive interpretation of the Environmental Rights Amendment needs to be taken into account” even if the township chose not cite it in their decision:
​ 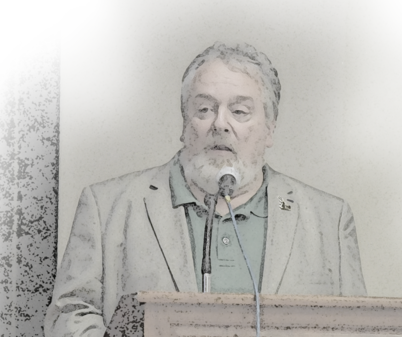 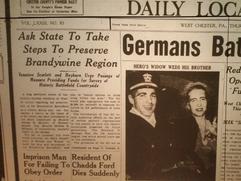 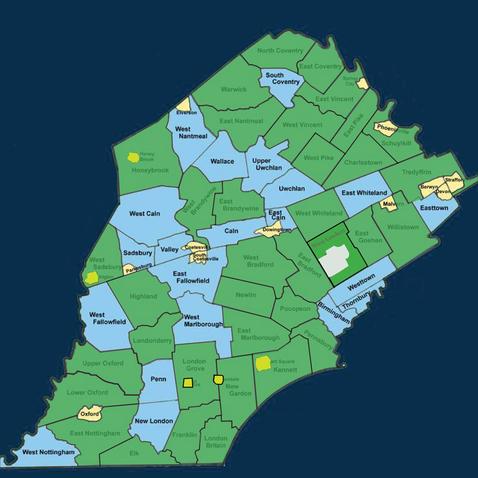 After he finished speaking, Mark Thompson got a round of applause, an exceptionally rare occurrence in a land use appeal let alone any courtroom! Such a display of support – in a courtroom – for the preservation of one particular farm must truly be unique in Chester County's history.
​
Next up was the the Robinson’s attorney who said that “the family had no interest in maintaining 322 acres… and that they should not have to be burdened with the obligations that go along with owning the farm.” This very curious statement of course ignored the fact that the Robinsons were not just heirs to the Acme fortune: they were the beneficiaries of a very generous Pennsylvania tax abatement program called Act 319 which lowered their tax bills on the open land of Crebilly by 9/10ths of they would be otherwise. The public, then, had to pay higher rates for 40+ years to cover what wasn’t being collected from Crebilly Farm. Now that they would sell their farm to the likes of Toll Brothers, they would merely have to pay back the last six years of property “roll back taxes,” plus the current partial year. 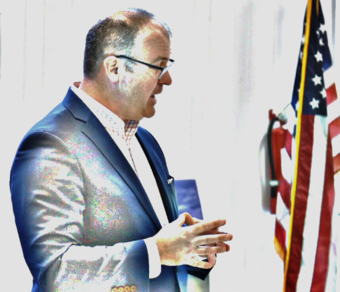 In an amazing display of support for preserving Crebilly Farm, concerned residents packed the large Courtroom 1 on Monday to hear oral arguments in Toll Brothers’ appeal of Westtown’s rejection of their colony. As the appellant, Toll went first and, predictably, twisted Westtown’s code into a self-serving tangle to make the point that Westtown Supervisors misread their own ordinances. They claimed all sorts of drivel, the most outrageous of which being that Toll shouldn’t have to modify an intersection like 926 and New Street  – even though it sits on southwest corner of Crebilly and would be heavily used by residents of their development. In short, Toll felt that they shouldn’t have to follow Westtown’s development ordinances and stated to the judge that Neighbors for Crebilly have to “take this appeal as they find it.” In other words, since Toll’s appeal is based on the township’s decision which didn’t use any of the evidence we provided over many meetings, Toll thinks they should not be bound to that evidence, either. More on this later. Another point made by Toll's attorney was that they're preserving 60% of Crebilly Farm. Naturally, their open space calculations are absurd: they include backyards and non-contiguous areas enclosed by the development, all completely useless to wildlife and recreation and none of which contribute to scenic views. Part of their open space also includes sewage drain fields and wetlands. Much of the area they claim to be saving simply can't be developed because of topography and hydrology.
​ 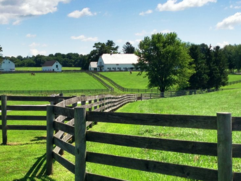 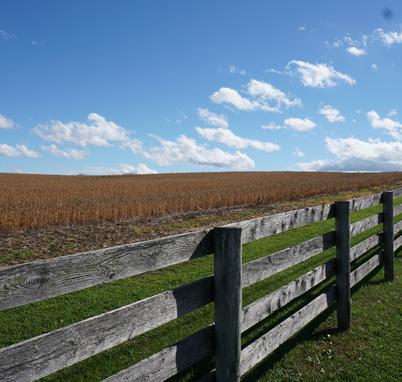 Should a family that has received millions of dollars in taxpayer subsidies over four decades not have to give taxpayers the right of first refusal on the sale of their land? We've been asking this question for two years. According to their lawyer, though, they should be able to destroy this iconic place without regard for its history, environmental value, or contributions from taxpayers. 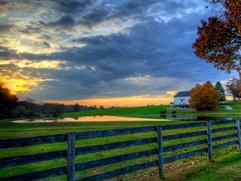 J. Michael Miller, retired chief archivist for the United States Marine Corps, testified to battlefield topography and the necessity of preserving battlefields for future study by military historians. He also spoke to the likelihood of action taking place at Crebilly given the flanking maneuver by the Hessions on General Stephen's position.

The differences in open space preservation efforts between townships is dramatic and those differences arise mainly from the decision to pass open space funding referenda which create a funding source for conservation in the township. 37 townships have passed such referenda but Westtown has not. Some  township like West Marlborough, East Fallowfield, and some others which didn't have referenda still have signficant open space preserved. Below is a list of townships and the type of levy that was authorized by voters. Click for a larger view.

Mr. Thompson noted that while the township may not have adopted our arguments regarding the Environmental Rights Amendment, the case law is clear that “this court could affirm on any basis…” which includes the arguments we raised during the conditional use process.  He continued that if the judge should decide that he disagreed with the township’s case, he could nevertheless affirm their denial based on the evidence that Toll’s development ran afoul of the Environmental Rights Amendment. Mr. Thompson cited Article 1, Section 27 directly and noted the responsibility of the Commonwealth as a trustee to safeguard our environment. This was also the argument made by the PA Supreme Court in 2017 in the Pennsylvania Environmental Defense Foundation vs. the Commonwealth case.  What’s more, the protection of historical resources as guaranteed by the PA Constitution has relevance and signficance beyond the Crebilly case. It’s important not just to Chester County, but to our national history as well and to our understanding of the Battle of the Brandywine and the larger Revolutionary War. “Once it's developed, you can never get it back,” he said.

“Under the Environmental Defense Foundation case [before the PA Supreme Court], they said that the plain meaning of the terms ‘conserve and maintain’ in Article 1, §27 implicates a duty to prevent and remedy the degradation, diminution, or depletion of public natural resources whether these harms might result in direct state action or from the action of private parties. The argument that we advanced to the board of supervisors and that we’re advancing to this court is that this is something that the court can take into consideration and should take into consideration for making a determination as to whether or not Toll Brothers met its burden.” -Mark Thompson, Attorney for NFC